When you live in a fat body, you live in a world where bodies like yours are so far outside the norm that they’re only used in media to send a message. A fat body is never just a fat body: It’s a symbol, and 99.5% of the time, a symbol of something negative.

Video games are, of course, no exception. It’s rare to see a fat character, and the ability to play a fat character yourself is nonexistent. My own favorite game, the massive multiplayer online Final Fantasy XIV, restricts character selections to a range of supermodel-esque female designs (including catgirls and spike-heeled Playboy bunnies) and sleekly muscled or outright ripped bodybuilder male designs.

(When designing my own character, I chose to play a Lalafell, the game’s slightly chubby and childish gnome-type race, in part so that I wouldn’t be constantly staring at an impossible body ideal for hours on end.)

There is, of course, an argument to be made that games based in fiction need not have realistic character designs: After all, you’re not likely to see a Tolkein-style dwarf walking down the street in real life.

But, like similar excuses for a lack of diverse bodies on runways and in advertising (“It’s aspirational!”), I have little patience for video-game body exclusivity. The source doesn’t matter: The more we’re surrounded by bodies that only meet one impossible standard, the more dissatisfied we are with the bodies we possess in solid flesh.

So I was pretty excited when I started playing through a new storyline in my beloved (but cumbersomely-named) Final Fantasy XIV yesterday and discovered an actual fat character, Dulia-Chai:

She’s realistically designed, like an actual fat person! I know folks with faces shaped like that! She’s adorable and beautiful! I want to cosplay her!

And about five seconds later, I realized that nope, this isn’t just a character who happens to be fat, living her life. Oh, no. She’s a symbol of the greed and gluttony of the city in which she lives. Not only is she fat (and thus greedy and gluttonous), but she’s shallow and foolish and overly enthusiastic, she tackles other characters inappropriately, and she’s clearly supposed to be so vain that she can’t tell how ashamed she should be of her fatness.

Though the character is sympathetically designed from a physical standpoint (i.e., she’s not a caricature of a fat person, and looks pretty realistic), your character (the one you control and play through the storyline) will take a step back and look shocked upon meeting her.

This character, who looks like me and people I know, is supposed to be so horrific and grotesque that the logical reaction is to openly gawk, and literally back away.

How would that make you feel, friend?

And then, pump primed for horror, you meet the city’s ruler, Lord Vauthry:

Vauthry is…well, clearly not realistically designed. His head floats on a column of fat. He’s like a fat character wearing several fat suits. And despite ruling an entire city and having supernatural power at his beck and call, he’s portrayed as slow, stupid, and so childish that, when his actions are questioned, he slowly topples forward from his seat, rolling like a beach ball, and pitched a toddler tantrum, beating his hands (slowly) against the floor.

I’ve given you a couple of images here so that you can get a sense of his scale compared to “normal” characters, and so you can see that he is so large that he is literally compressing some sort of other being in his armpit.

The closest media comparison I can think of at the moment is the That 70s Show episode that shows the lead character, Eric, in a dream sequence where he is so fat that, like Vauthry, his head is a tiny lump and he is crushing another (thin) character without even realizing it.

(And no, I’m not linking to it, but the scene exists on Youtube if you want to see it.)

Unlike Dulia-Chai, Vauthry is a caricature, but one that’s so widely repeated across the media, TV, and artwork that it’s immediately recognizable.

How would you feel if the only times you ever saw someone like you were times where you were supposed to immediately understand that that person is everything you should hate?

This is why I fight: because every human deserves to see people like them in every sort of context. Our bodies should not be shorthands.

Every Monday, I send out my Body Liberation Guide, a thoughtful email jam-packed with resources for changing the way you see your own body and the bodies you see around you. And it’s free. Let’s change the world together.

Sign up for Lindley's newsletter and get a free gift → 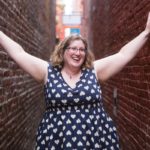