Image description: An orange nylon-coated dead blow hammer rests on top of a black bathroom scale on a concrete sidewalk.

Smashing diet culture metaphorically is great, but smashing it literally feels even better. There’s no statement quite as satisfying as breaking up with diet culture by smashing your bathroom scale!

We are so much more than any number. Numbers have a way of making you feel like you don’t measure up, but it is impossible to quantify the magic of who you are as a person simply by the number on a scale!

Whether you’re recovering from an eating disorder like anorexia, bulimia or orthorexia, learning to reject dieting and accept your body or moving further in your journey to accepting your body, it can be very liberating to finally say that you’re no longer going to let the number on the scale define you.

The first weighing scale — which was also one of the first automatic vending machines — was brought to the U.S. from Germany in 1885. The convenience and ease of using a machine that didn’t rely on counterweights and was relatively precise quickly fed into diet culture and created a new profit path for healthcare providers.

Concepts of a “normal” body size became relevant around 1900 outside of the military, for example in school examinations and checkups by panel doctors or medical officers (and around the late mid-19th century in insurance policies). Anthropometrists and medical scientists aimed to measure the human body in size and shape in order to improve its ability to work and its performance potential.

The measurements needed to be as precise as possible in order to enhance health and the life expectancy of entire nations. However, at around the same time, some doctors began to (re)discover “obesity” as a new (and profitable) problem for wealthy citizens.

– Weighed and found lacking? A Brief History of Bathroom Scales by Debra Frommeld

If the bathroom scale is or was a tool you have used to measure your worthiness and it has only left you feeling deprived and unhappy, it’s time to smash the scale!

Here are 14 photos from the Scale Smashing collection at Body Liberation Stock, the world’s first and best site for high-resolution stock images of large bodies for commercial use. These images can be used on your website, social media, flyers, brochures and other marketing materials to represent more of your customers, clients and prospects. You’ll also be helping to change the world by increasing the representation of large-bodied and fat folks.

These stock photos are often used by:

This picture shows a woman who is ready to smash her scale on the ground. You can see the determination in her face as she prepares to forcefully smash the scale and see it break into pieces in front of her eyes! For anyone who has struggled with any form of an eating disorder, I bet you can relate to that feeling of pure motivation to say goodbye to a toxic tool that has brought you so much self-loathing.

Smash smash smash! In this photo, a woman is using a crowbar to smash her bathroom scale. This action shot perfectly shows the energy and emotions that can go into a ritual to smash your scale. The woman in this photo is using a crowbar to smash her scale and she is focusing all her anger she has towards the scale into each swing she takes. She is using this process as a way to release the pain that the scale has caused her so she can leave it behind for good!

How much time have you spent looking down at those numbers and feeling inadequate? This picture is a reclamation that those numbers no longer are going to define how you feel about yourself. This one piece of the scale has caused so much distrust in ourselves.

This photo represents the power in the community. When it comes to fighting negative body image nothing can be more powerful than having others on the journey with you. Together with being able to reclaim your body’s you are able to support and encourage each other to put down (or smash) that scale and focus on the things that bring you joy. 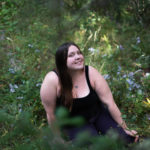 Shelbey Osborne is a 200-hour Yoga Teacher. She is passionate about yoga and astrology and uses these teachings to help individuals connect deeper to their own intuition. She is an advocate for body acceptance and applying a self-compassionate approach to all areas of our lives.